This model is scratch built using basswood, polystyrene and a Bachmann Big hauler tank that was mounted on a flatcar.


My railroad was intended to be 100% steam motive power, but I had a chance to pick up the D&RGW #50 narrow gauge diesel that was made by LGB for $100.00, so I jumped at the chance even though I am not a diesel fan. I had an area on the layout that i envisioned as a car shop and would need some sort of motive power to move the cars around in various stages of construction, so the #50 Diesel would be a perfect fir for that.  as It was a diesel, it would neet its own fuel storage, so after remembering that I had seen an elevated tank car on the Cumbres and Toltec when I rode it before.  I  collected photos of it as well as the one at  laws Ca. and then proceeded to use elements for both to create my elevated storage tank. 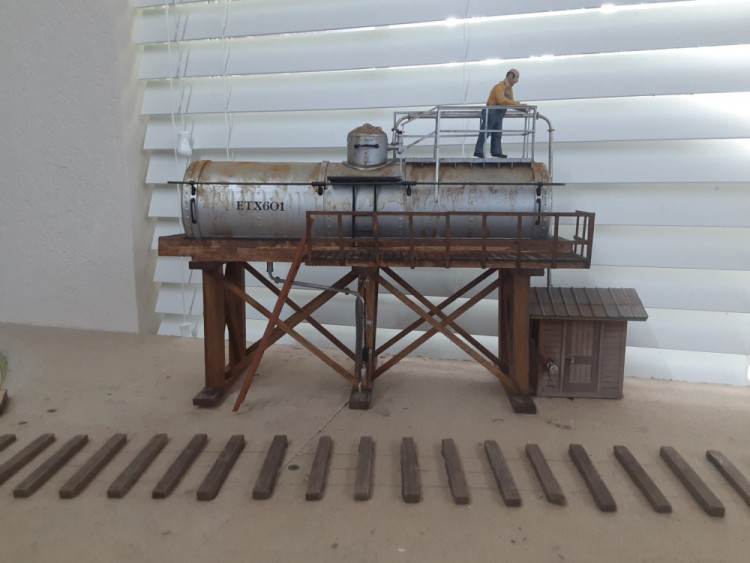 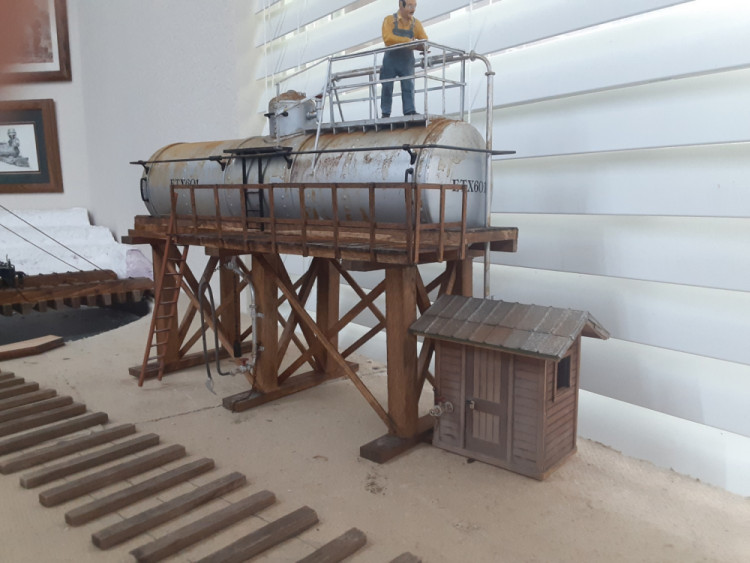 The supports and frame that the Bachmann Big Hauler tank sits on we cut on the bale saw from Basswood boards I  picked up at my local lumber store. They were all cut to scale based on what I could gather and extrapolate from the photos of elevated tanks.   the deck was cut from 3/32" thick basswood and each board was stained with Watco Wanut Danish oil before installing. the support structure was stained after it was assembled. 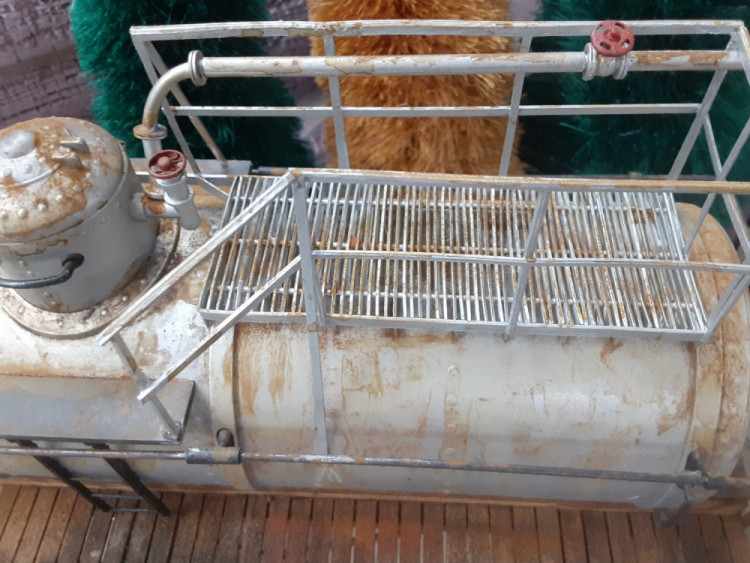 The deck on top of the tank car body was made from 1mm polystyrene.  I lazer cut these parts so that all the holes for the horizontal rods would be aligned exactly the same on each one.  3/32" brass rods were slipped into the holes and the slats were kinda evenly spaced by eye.  if I was to build it again I would create a spacer tool so that they would be all the same.  but  i think the it look OK as is.  the Hand rails were also made from 1mm polystyrene.  once all plastiwelded together, it was painted with silver paint and then glue to the top of the tank body. 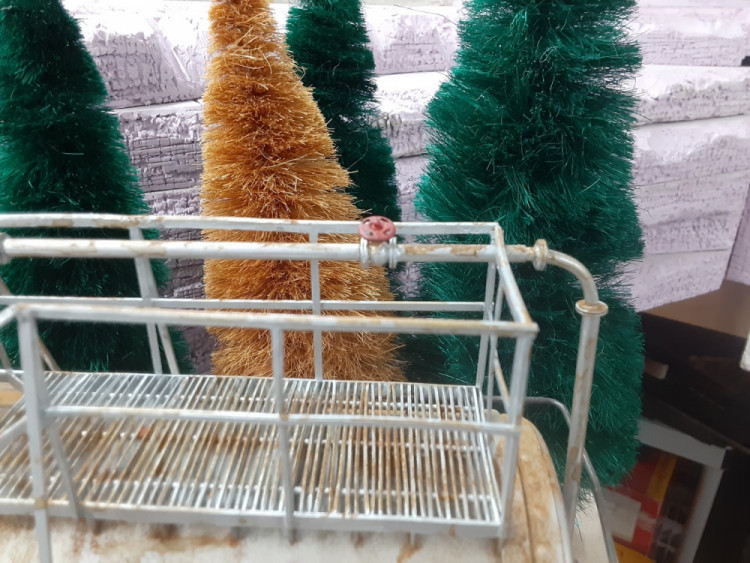 The pipes and valve were made from K&S aluminum tubing. two different sizes were used that  would telescope inside each other. the largest being 3/16" in diameter. Small aluminum washers were slipped over the smaller diameter tubing and then a small brass bead followed by two more small washers then more larger tubing. a drop of ACC was added to  hold it all together.  The washers by themselves represent flanges where the pipes were connected.  the ones with the bead in between are the valves.  I used shirt and dress snaps glued to a brass rod sticking out of the brass bead and when painted red, they look like the valve handles. 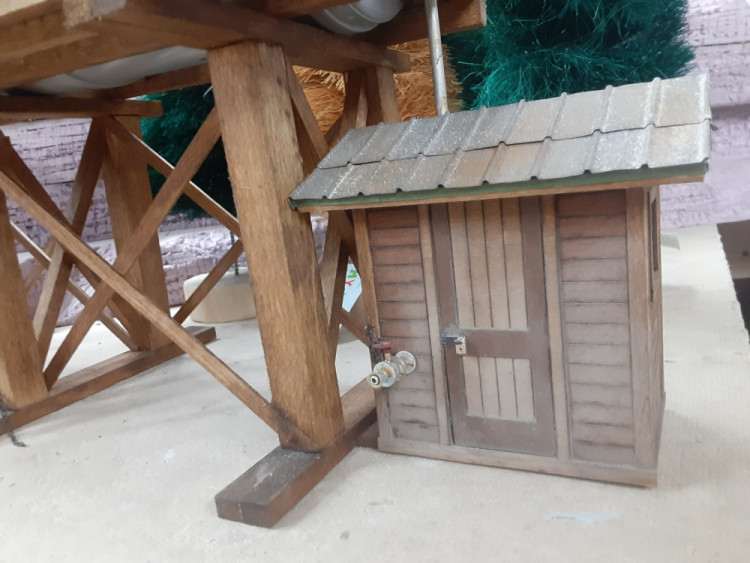 The valve assembly on the front of the building was made the same way as the globe valves on the tank.  the lock and hasp on the door are Ozark minature parts.  The shed is one of my D&RGW Coxo telephone booth  kits repurposed to act as the control shack for loaded fuel oil into the elevated tank.  The standing seam roofng material is O scale  made by Builders in Scale.
The building is lazer cut and etched from 1/8" luan plywood and the stained with Watco Walnut Danish oil stain.  The rust on the metal roofing is real rust powder that I have collected over the years and then brushed on after the roofing had been painted silver.​ 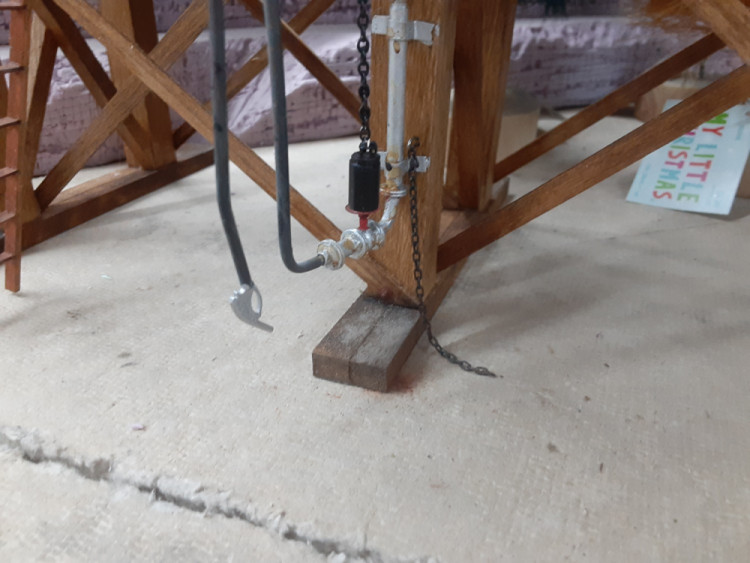 More valve assemblies and the gas handle was made from an O scale logging pike that was modified by gluing a peice of wire to it to form the handle and then the pike arm was inserted into heatshrink tubing which simuates the heavy hose used on gas pumps. a cnain and counter weight were added to keep the handle off the ground when not being used. 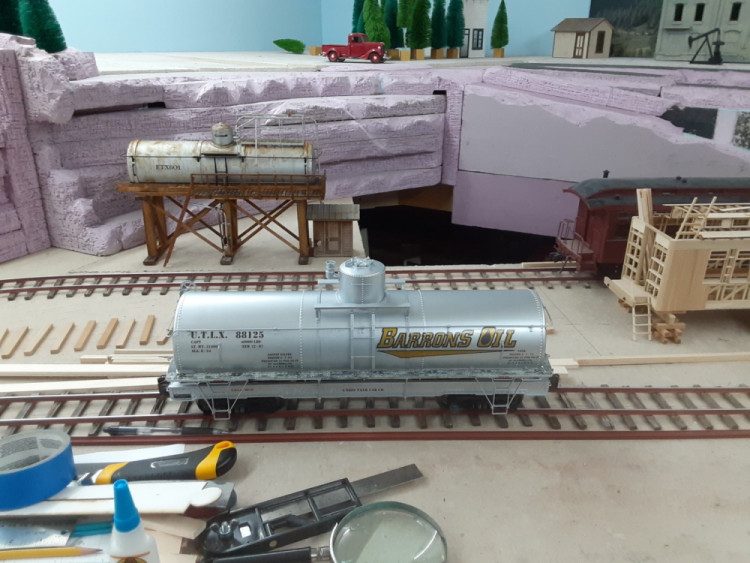 Originally the fuel tank was to be in the same area as the coaling tower and sand house and engine house, but there was not enough room for it there,  I moved it is current location which is on one of the track that will lead into the car shops once the building is built.  the passenger cars to the right are where the Building will be.  it will be two stalls and there will be an overhead crane on the outside of the building between it and the fuel storage tank.  this will be were #50 will live.

The tank car in the foreground is a Commemorative ​car I made in memory of my late mentor and friend Jim Barron, former owner of Trains of Texas, member of the Narrow gauge preservation Society and  Houston Live Stock Show and Rodeo Judge and Formula 1 race car driver that passed away in 2019 at the age os 81 just a couple months after his last Race.
Projects Projects